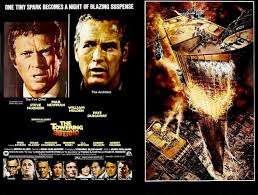 I am a movie freak! I do work in the film industry and studied literature to film in college. I love a good movie marathon. I actually buy small CD albums and I put my movies in those. I have small albums for 1950s SciFi, 1970s made-for-tv horror and 1970s disaster films! Some genres need a storage space because there are so many good ones to pick from. Remember sensoround? That sure made the movies pretty exciting!

Here's just some of the gems of disaster-is-happening films of the gas-shortage, Vietnam War, presidential impeachment, serial killers, three-mile-island decade. Consider starting your own little collection for a run down memory lane.

Rollercoaster (1977) A blackmailer threatens to sabotage roller coasters at various American amusement parks if he isn't paid a huge ransom.

Food of the Gods (1976) A group of friends travel to a remote Canadian island to hunt, only to be attacked by giant killer animals which have populated the place.

Airport (1970) A bomber on board an airplane, an airport almost closed by snow, and various personal problems of the people involved.

Avalanche (1978) The vacationers at a winter wonderland struggle to survive after an avalanche of snow crashes into their ski resort. Their holiday then turns into a game of survival.

Day of the Animals (1977) A battle for survival ensues after a group of hikers encounters a chemically imbalanced forest.

The Poseidon Adventure (1972) Nine people explore a cruise ship at sea in a manner that turns their whole lives upside down.

The Towering Inferno (1974) At the opening party of a colossal, but poorly constructed, office building, a massive fire breaks out that threatens to destroy the tower and everyone in it.

Flood! (1976) After several weeks of heavy rainfall, the dam above Brownsville is ready to burst. But the town's mayor refuses to open its gates - paving the way for disaster.

Fire!  (1977) A convict starts a fire in a forest to cover his escape, but the fire goes out of control and threatens to destroy a small mountain community.

Tidal Wave (1973)  Racked by earthquakes and volcanos, Japan is slowly sinking into the sea. A race against time and tide begins as Americans and the Japanese work together to salvage some fraction of the disappearing Japan.