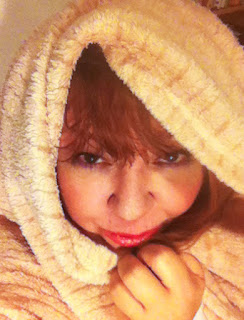 It's that time of year. Time to get your spook on. I'm not much for chopping flesh movies, but there are some great horror movies that terrify and most especially when viewed alone. Here's my top 10 favorites for alone watching.
The best way to see a movie alone is in the dark or in a blanket fort, but also by candlelight. Somehow, that flickering candle makes you realize how very alone you are. 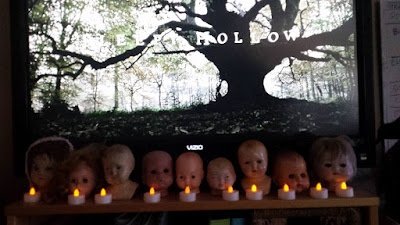 Above, you see a pic of doll heads I lined up under the TV with battery-operated candles and "Sleepy Hollow" playing.

Alone in the Dark
Lunatics in the asylum are upset that their doctor moved away to a new job. They are certain the doctor replacing him had killed their favorite psychiatrist. So they break free of the asylum and stalk him and his family. Tons of top stars in this film and easily missed by folks.

Night of the Living Dead
A group of rag tag folks find a farmhouse to hide out in when the zombies take over the world.

Phantasm
A kid haunted by his parents' deaths and clinging to his older brother tries to solve a mystery at the local mortuary.

Scream
A high school girl is stalked by a killer.

The Omen
This dark film with a great star cast involves what would happen if Satan's child was born into a political family.

The Amityville Horror
A newly formed family buys their dream house, only it has a dark history of a man killing his family there before them.

The Blair Witch Project
College kids set off into some famously haunted woods that a witch supposedly terrorizes. Then, they get lost. Is the witch stalking them?

The Descent
A group of female friends decides to go spelunking in a cave. Then, they get caught and chased by some kind of cave humanoids.

When A Stranger Calls
Either the old or new versions of this movie are effective. The same scenario of a babysitter tormented by a prank caller.

Enjoy your movie watching alone, but be sure to make it a very special viewing. I like to get black licorice Twizzlers, bite the end off of one, use it as a straw in some hot cocoa.