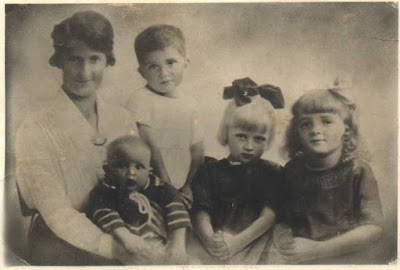 My grandmother from Sweden, married to my grandfather from Norway entered Ellis Island twice. She got homesick, went back to Norway with my father and his sisters and came back a second time to stay. Here, their name was Thorvaldsen. Later, grandpa would change it to something more "American," the surname Day.
Post by Sharon

Many Americans have a sense of being adopted. We don't really know the countries of our genetic origins, but we might have heard stories from our elders of their crossing or their ancestors' crossings to America. 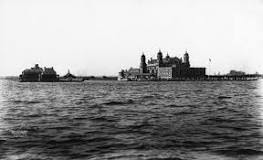 Ellis Island in New York opened in 1892 and closed in 1954. About 40% of us can trace our ancestors back to this entrance to the US.

I looked at records of my grandparents coming through. It was interesting to note misspellings of their names that stuck. My father's name was Sten. They wrote him down as Stanley. Grandpa's name involved a letter not used in English, Øivind, which they wrote down as Eivind. Grandmother, who was Marta, became Martha. This is just the beginning of immigrants names being changed and sometimes forever misspelled by American descendants.

Interestingly, in their notes, they ask the immigrants to give a friend in the US who will vouch/sponsor them and a final destination area of where they are headed.

Of the 12 million people who entered Ellis Island to be new citizens, only 2% were turned away.

It was interesting for me to realize that 9% of Norway immigrated to America in the 1880s. My grandfather came here because WWI meant his family could no sell metal to Germany. It had hurt the family business and so he exited for a new frontier as the baby of the family, not likely to inherit much.

He settled his family in California where he worked as a carpenter on the new suspension bridges being erected in the Western US and Canada.

When he decided to take an "American" name, he went to the judge to change it. He didn't realize he had to pick a name, figuring the judge gave him one. He looked at the judge's name plate, "O'Day" and decided on "Day." Hence, my simple but rather phony last name began.

A great percentage of us have ancestors who came to America through Ellis Island and it remains open to the public to allow us to revisit the path they took.

At one point in my grandmother's latter years, my father took her to New York, back to the place she entered America. A few years into living here, she had taken him and his sisters back to Norway and came back again a few years later to stay. It was never an easy thing to go to a new country, not know the language, and live with people who don't feel like your people. It was watching her children grow here and do well that made grandmother realize it was the best gift she gave them.

We are so blessed to be citizens of a country that has so many vast resources, climates, enormous size, and variety of citizens from various origins who bring their talents, customs, traditions, music, foods, technology and more to make us the most amazing nation ever.