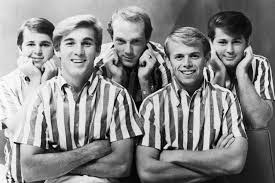 Coming out of the big band era and crooners like Frank Sinatra, the sounds of the 1960s were so diverse, it was a regular smorgasbord of tunes for all ears.

Let's look at the icons of the decade to see how rock and roll's adolescence was moving at an accelerated pace.

Elvis Presley
The Who
The Beach Boys

The Doors
The Beatles

Jefferson Airplane
The Mamas and the Papas

The Archies
The Marcels
Paul Revere and the Raiders
The Hollies

Herman's Hermits
The Fifth Dimension
And remember this???
American Bandstand 1963