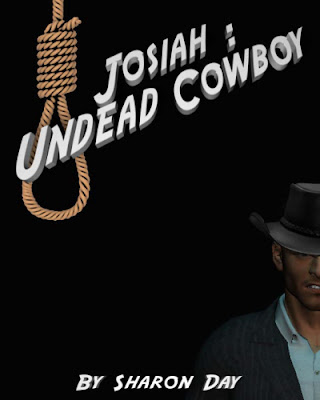 I was inspired to create a scarecrow for the cactus garden. I pondered what kind to make and decided on a cowboy. But not just any cowboy!

From my Kindle novella "Josiah: Undead Cowboy," I decided to design my scarecrow.

This is one of my favorite books I ever wrote and it's the first in the Midnight Arroyo Series. I am completing book two and three. Three stories with all involving magical gold and an arroyo that ran through all three towns. The themes involve vampires, zombies, and werewolves in an old west setting with reluctant heroes.

How did the cowboy get to this point? One day Josiah was an anonymous cowpoke in a gold rush town, the next day he was undead. Was there anyway he could end his eternity in the Arizona desert? The answers were deep inside an abandoned gold mine where the Spirit of the Gold and his ghoulish minions resided. As the self-proclaimed guardian of the ghost town filled with ghosts, Josiah walks the line between dead and alive. When the cowboy tries to protect a woman from the ghouls, it becomes apparent that she might have more to fear from him. This 25,000 word, 7-chapter novella is the first in a series of western twists on horror classic themes, a series entitled “Midnight Arroyo.” 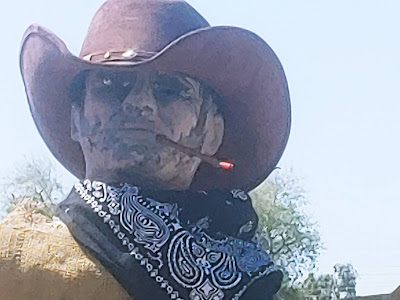 Here's the beginnings of Josiah - and I am proud to say that all the materials were found or lying around - nothing bought.
The head was made from a plastic form head that was part of a Halloween ghost  decoration. I painted it. Used a stick as a cigarillo painted red at the tip. One of my cowboy hats is on his head.
Ironically, the whole idea began with a piece of beaten up burlap that landed in the yard from the street. I thought - scarecrow material!
Then, I thought up the idea of doing Josiah and I wanted a black bandana for him. The next day, out in the yard, a new black bandana was hooked on a bush.  How does that happen? I guess when one has a creative idea, the paths open! 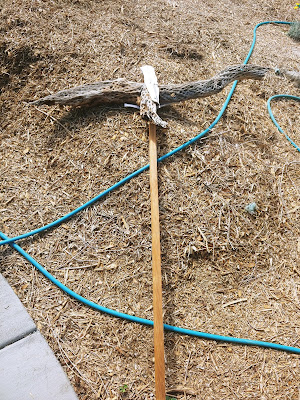 The post came from a tree I just planted, making Josiah 7 feet tall! The arms? An old cholla cactus skeleton that dried out - making him look more undead. 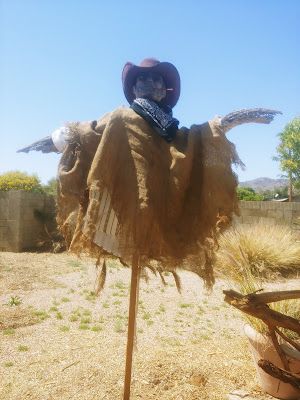 I used the burlap for a poncho and put an old western shirt I had underneath. I will be adding the bottom half of him and perhaps some props. For now, I am pleased that he cost me nothing, but I brought him to life in the cactus garden.
Expect me to share the final result when he's completed!