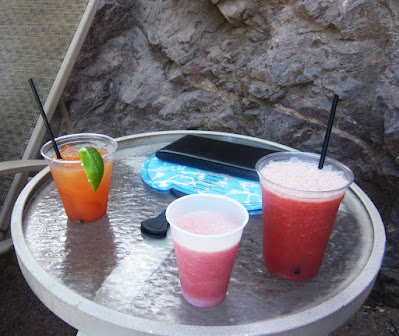 Whether you do a vacation this summer or not, you likely carry some great summer getaway dreams. Perhaps you can recreate the vibe at home if you can't get away. Let's look at some inspiring movies with summer vacation themes!

Summer Rental
John Candy at his best as an exhausted air traffic controller husband forced to take time off with his family. In a seaside rental, he finds himself again. Comedy

National Lampoon's Vacation
A well-meaning dad wants to take the kids to the California amusement park mecca of their dreams and decides a road trip is the best way to hang together. Of course, anything that can get in the way, does. Comedy

Gidget
A teenaged tomboy budding into a young woman decides to learn to surf and hangs with the surfer boys, and one of them is super dreamy. But can she make him see her as anything but an awkward adolescent? Drama Comedy Romance

RV
Robin Williams as a dad who wants to spend vacation time with his kids, while also meeting his work goals. An RV trek seems like the ideal choice until everything goes wrong. Comedy

What About Bob?
Bill Murray as a very needy psychiatric patient who chases his psychiatrist (Richard Dreyfus) on his vacation in New England, wreaking havoc on the professional's book launch. Comedy

My Father the Hero
Katherine Heigl as an adolescent girl on vacation with her estranged father. Wanting a boy to see her as an older girl, she convinces him she is staying at the resort with her lover (not her father). This causes her dad a ton of grief for some unknown offense everyone at the resorts knows about but him. Comedy Romance

The Great Outdoors
John Candy and Dan Ackroyd in a hilarious tale of a family man's cabin stay interrupted by his obnoxious brother-in-law. Comedy

Mr. Hobbs Takes a Vacation
Jimmy Stewart is sensation in this movie about a man wanting a quiet vacation, but then his wife invites all the family. Drama Comedy

Summer of `42
An eager teen on summer vacation in Nantucket, falls for an older woman whose husband is away at war. He is angling how to have her deflower him when tragedy strikes. Drama Romance

Dirty Dancing
A young woman is stuck in the Catskills on vacation with her parents. Looking for a distraction, she falls for the dance instructor at the resort. Drama Romance

Jaws
(my favorite movie of all time). Summer in New England on a cheery island should be ideal, but all is shaken up during Fourth of July when a shark attack occurs, and then another, and then another. Drama

Blame it on Rio
Two dads take their teenaged daughters to Rio on vacation. One girl has a crush on the other girl's dad and puts the moves on him. Comedy Romance

The Sisterhood of the Traveling Pants
Four girls knowing they are moving on and their lives are changing, share a magical pair of jeans over the summer wherever they go, so they may remain connected. Comedy drama

Stealing Beauty
Liv Tyler plays a 19-year-old girl who heads to an artist compound in Italy where her mother spent her youth. She carries two objectives - to find her biological father and lose her virginity to a local boy. Drama Romance

The Parent Trap
Twins attend the same summer camp only to realize their parents split them up when they were babies. They decide to switch places and learn about the parent they never knew. Comedy

Wet Hot American Summer
It's 1981 high drama when summer camp counselors are closing out for the season and express all their frustrations. Comedy

Now and Then
For anyone who recalls the 1960s/70s childhoods, this is a winner! Four women get together when one of them is having a baby (they promised as kids to come when one of them needed the others). They reminesce about their summers growing up together. Great soundtrack. Nailed the early 70s. Comedy Drama

Forgetting Sarah Marshall
A musician trying to get over a breakup with his Hollywood babe, goes to Hawaii, only to be faced with her and her new rockstar boyfriend. Comedy Romance

Couples Retreat
Four couples go to the South Pacific to a couple retreat to support one of the couples that is considering breaking up. There, they find that their own relationships might be in trouble. Comedy

The Other Woman
A clueless housewife finds out her husband is cheating, makes friends with the other woman, and they stalk the other other woman. Comedy Drama

Blue Crush
A surfer girls falls for a guy when she is training for a big competition. Drama Romance

How Stella Got Her Groove Back
A 40-something woman goes on vacation and falls for a 20-something guy. Drama Romance

Shirley Valentine
A housewife leaves her neglecting husband to go on a vacation to Greece but then decides to stay. Comedy Drama Romance

Under the Tuscan Sun
A divorced writer on a whim moves to Tuscany. She struggles to make a home of her own and reach her dreams but it all seems so hard to obtain until she finally quits trying and lets it find her. Comedy Romance Drama

Summer School
This 80s fun-fest is about two summer school instructors distracted by the beach and each other.