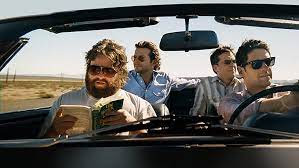 "The Hangover"
What happens when you bring a group of females or a group of males together in a pack? Usually laughter-inducing fun.
Let's look at some fun movies that show gal pal strength and dude culture.
Guys
Kid ensembles
Stand By Me
Best friend boys spend their summer in search of a supposed corpse hit by a train, realizing they are on the cusp of young adulthood and possibly drifting apart.
Jonny Quest
Delightful archaeology-themed cartoon involving archaeologists and two lucky boys who get to tag along.
Ribald Comedy
The Hangover
When one friend is getting married, the men head to Las Vegas for a last hurrah only to wake up from being slipped a Mickey and unable to find the groom.
American Pie
High school seniors make a pact to lose virginity by the prom.
Porky's
1950s horny teenaged boys and their antics.
War
The Monuments Men
A platoon deployed during WWII to find art stolen by the Nazis.
Saving Private Ryan
After Normandy landing, soldiers go in search of a lost paratrooper whose brothers died in the war.
Sports
The Replacements
Substitute players are brought in during an athlete's strike.
Remember the Titans
A newly appointed Black coach in a newly integrated school has to deal with the tensions.

Oceans Eleven
After coming out of prison, a criminal puts together 11 thieves to knock off the three biggest casinos.

Without a Paddle
When one of the friends dies, a group of buddies decide to live their dream going camping in search of hijacking criminal, DB Cooper's loot.

Wild Hogs
Middle-aged suburban friends decide to make a motorcycle trek and get in over their inexperienced heads.

Lord of the Rings
A fantasy movie about middle earth and hobbits try to destroy a ring and save their world.

Apollo 13
The NASA launch that ran into complications in space and almost didn't make it home.

Dog Soldiers
In Scotland, a routine military exercise goes wrong when they encounter werewolves.
The Lost Boys
A seaside gang of vampire decides to take a new town teenaged member into their group.
Drama
Reservoir Dogs
When a jewelry heist goes wrong, the criminal suspect one of them is an undercover cop.

The Godfather
When an organized criminal leader wants to retire, he passes off his power to his reluctant son.
Western
The Magnificent Seven
Seven gunfighters are hired by a Mexican village to protect them.
Tombstone
A retired lawman tries to retire quietly in Tombstone, but his plan is thwarted by the kind of outlaws he was famous for going after.
Gals
Girl Power
The Women
Best friend gal pals circle their friend whose husband is cheating on her.
First Wives Club
Three women who were left by their spouses decide it's time women got revenge.
The Other Woman
A woman whose husband is cheating on her befriends the other woman and they together befriend the next other woman and plot revenge.
Wine Country
When long-time friends have a gal in their group turning 50, they decide to celebrate in wine country where all their issues come forth.
Sex and the City
Friends in New York are past the youthful issues and into the middle-aged ones.
How to be Single
A college graduate moves to the big city and goes through all the awkward times of single and young in the city, only to find she wants to please herself and her goals first.
He's Just Not That Into You
This movie (which should be part of our curriculum) reveals what we have told ourselves about men and relationships and how we turn ourselves inside out when it's really not that complicated. He's either into you, or not.
Steel Magnolias
A beautician moves to the South and becomes part of her beauty parlor gals clique.
Kid ensemble
Now and Then
Movie told of best friends who in summer of 1970 had lots of adventures together. In present day, the come together for their pregnant friend to reminesce.

Josie and the Pussycats
Bubble gum girl group of singers.
Ribald Comedy
Bridesmaids
Best friends find one of them engaged and moving up while the other's world is crashing around her. Together the group of friends helps one through the threshold and tries to shore the other one up.
Mean Girls
First day at a new high school is tough enough, but when you were homeschooled in Africa and don't know the customs of the "populars," it becomes complicated.
The Sweetest Thing
Hardcore single girls trying to find fun, but when one finally thinks she's in love, the man is getting married.
9 to 5
Office workers get back at their sexist boss.
Fun Mom's Dinner
Mom's from an elementary school get together for a fun supper only to end up with a night of totally letting off steam.
Bad Moms
Moms who are all very different find themselves together as they deal with how hard it is to be a mom. They make a pack to accept they are bad moms and things finally click.
Horror/Action
The Descent
A group of women go caving only to get trapped and chased by some kind of cave-dwelling humanoid.
Charlie's Angels
Women brought together by the leader of a private eye agency go to battle over criminals using their smarts, looks, and charm.