Bonfires and scary tales - the perfect event for late summer and autumn
Here's some good bonfire recipes:
Banana dessert (I make this on every camping trip) Take a banana, slice it down the middle lengthwise. Spread peanut butter, put in miniature chocolate chips. Wrap in foil. Heat a few minutes. Eat with a spoon.
Classy smores  Heat two marshmallows over fire until gooey. Lay out a cookie (any type), put some Hershey's candy bar rectangles on it, slide the marshmallows onto the chocolate, place another cookie over top.
Building a Bonfire

Sturdy logs, kindling in between, seems like a no-brainer, but some folks have trouble starting their fires and keeping them growing. You can also use dried up bark or stripping from a pine tree to help get the initial flames going, but kindling (small twigs) and bigger logs help in the different phases of building a fire and making it roar.
Campfire Tales (from this site that has more). The key to good campfire tales is to play up the urban legends, escaped maniacs, killers, ghosts, and woodland monsters. Tell the story as if it were a true event that occurred in the past (think Blair Witch Project).
La Llorona:  Once there was a widow who wished to marry a rich nobleman. However, the nobleman did not want to raise another man's children and he dismissed her. The widow was determined to have the nobleman for her own, so the widow drowned her children to be free of them. When she told the nobleman what she had done, he was horrified and would have nothing more to do with her. As she left him, the widow was overcome by the terrible crime she had committed and went to the river, looking for her children. But they were gone. She drowned herself and her spirit was condemned to wander the waterways, weeping and searching for her children until the end of time.
Ghost:   The train rumbled around him as he adjusted the throttle. The night shift was always the toughest, in the engineer's mind. He had rumbled through Timpas a few minutes ago and was on his way to Thatcher. Not a bad stretch of road, and there was no better train in the entire Atchison, Topeka & Santa Fe Railroad.
He stretched a bit and yawned, trying to stay alert. And then he gasped. The lights had picked up the figure of a beautiful woman with long red-gold hair and wonderful blue eyes standing near the tracks. Too near! He sounded his horn to warn her away and then he realized that the light was shining right through her. She was a ghost!

The engineer never did.
Maco Light  On a night in 1867, at the small Brunswick County station of Maco fifteen miles west of Wilmington, a slow freight train was puffing down the track. In the caboose was Joe Baldwin, the flagman. A jerking noise startled him, and he was aware that his caboose had become uncoupled from the rest of the train, which went heedlessly on its way. As the caboose slackened speed, Joe looked up and saw the beaming light of a fast passenger train bearing down upon him. Grabbing his lantern, he waved it frantically to warn the oncoming engineer of the imminent danger. It was too late. At a trestle over the swamp, the passenger train plowed into the caboose. Joe was decapitated: his head flew into the swamp on one side of the track, his lantern on the other. It was days before the destruction caused by the wreck was cleared away. And when Joe's head could not be found, his body was buried without it.
Thereafter on misty nights, Joe's headless ghost appeared at Maco, a lantern in its hand. Anyone standing at the trestle first saw an indistinct flicker moving up and down, back and forth. Then the beam swiftly moved forward, growing brighter and brighter as it neared the trestle. About fifty feet away it burst into a brilliant, burning radiance. After that, it dimmed, backed away down the track, and disappeared.

Book of Spooky Campfire Tales
It may not be bonfire weather yet, but you might try a modified version - how about candlelight and a classic movie for those kind of nights -
Do you live in an apartment?
How about the sentimental scent of a bonfire? 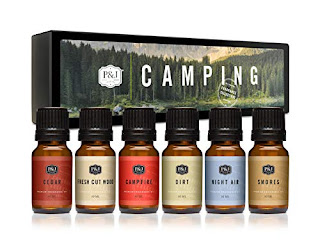 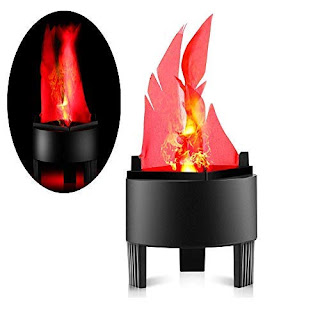 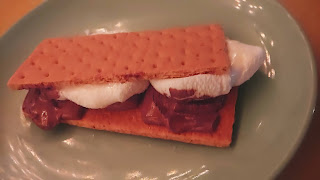 I would use the scent, the fake fire, the smores, and then add the best scary bonfire tales movie that gives you all the chills of urban legends - LOVE IT!!!! 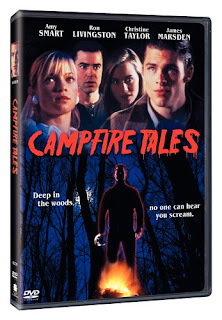 Campfire Tales
Enjoy the darkness surrounding you and the hope found in the focus of light and warmth. This is what legends are made of -