Working on Your Balance 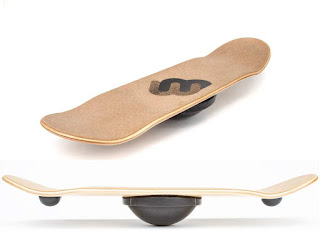 As you age, balance becomes a bigger problem. Sometimes, it's something as simple as an otolith (stone that develops in your ear and causes vertigo) and a simple Epley Maneuver (end of post video) can move it. But, most of the issues with balance have to do with deconditioning.

I remember one time I saw this couple that had set up their custom home so the floors had ridges, climbs, different textures so as they aged they would stay in shape just by navigating from one  room to another. It was actually a pretty cool idea (except when it came time to move furniture).

Weak muscles and death of cells in our vestibular can lead to lack of autocorrection so if we do stumble, we don't save ourselves as easily as we used to.

As a prior avid skateboarder and frustrated surfer-wannabe, I chose a balance board. I don't run the risks of actually skateboarding, but as I work to move and balance on the board while watching surfers (trying to mimic their moves), I am working not only my sense of balance but strengthening fine muscles we often don't use that support the larger muscles.

Other things that can help balance -

yoga - hold pose a while

dancing with your eyes closed

standing on one leg

One out of four older citizens fall in a year.  Don't neglect this important facet of health and well being.